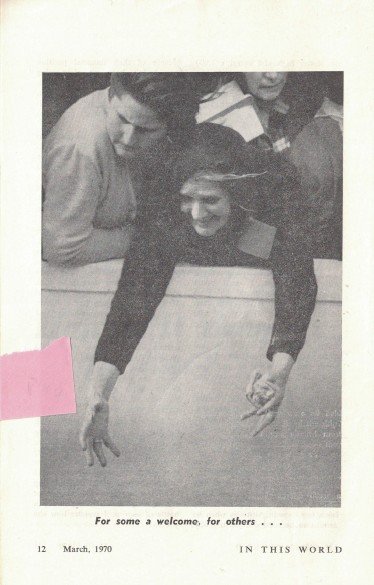 Have you ever been for a sea trip aboard a large passenger liner? Do you remember how you wondered if you would be sea sick as you walked down narrow passages that lifted and fell under your feet?

Do you remember the spirit of the ship — how people would look at one another and feel drawn to one another because they were all held together within the walls of the ship?

In the ship I was aboard most of the people had another tie — they were mainly all migrating to Australia.

I came aboard at Fremantle, W.A., together with two other chaplains — one an Anglican, the other a minister of the Churches of Christ. We had a cabin together on the main deck of the liner — a monster hotel ten stories high and carrying 1,600 passengers.

Some had cabins right up top where every movement of the ship was accentuated, some were right in the bowels of the ship where the engines roared and rattled 24 hours per day — but there were some on every level.

I was privileged to spend a week with these people. I spent hours each day meeting them, filling in census papers and talking with them about themselves. They would talk till the early hours of the morning, speaking of life in the old country, of their families, of the things that made them decide to migrate, of their hopes and ambitions in their new country. I would like to tell you about some of them.

There was a European family, John and Elaine and their five children aged three to eight years. John’s parents had been British so they spoke English perfectly. Being Europeans they paid their own way out and were ineligible to live in a hostel when they came here.

All their savings went into this trip. John told me that he had sufficient money to keep his family for a few days in Australia when he arrived so he needed a job urgently.

Because of their financial position they hadn’t been on sight-seeing tours around the ports at which the ship berthed on the way out. They hadn’t been on any big spending sprees. They weren’t at parties every night either.

Coupled with their worries was their job of keeping their five children safely amused every day in a confined space. So it was a tired and worried couple that came to speak to me. Do you want to know what their first question was? “How much will it cost to send our kids to Catholic schools in Australia?”

Later I was to see John and Elaine off through the Customs at Melbourne. They had parked their cases at the port. John was carrying little Sue aged just three. It was early afternoon and they were off to look for a place to sleep that night in Melbourne, their new home. Where would you have recommended them to go if you had been me?

Then there was Helga, a Dutch woman and a widow who could speak no English. She had a daughter, Louise, aged eleven. On the night before the ship berthed Helga went to the ship’s purser and got her bag with all her money in it. That night it was stolen.

I heard Helga talking loudly with the help of an interpreter to one of the ship’s officials just before disembarking began. He was terribly sorry for Helga but it was of course impossible to search everyone. I couldn’t help imagining Helga trying to catch a bus for a job interview, or making a phone call, or buying a bottle of aspirins. I wonder how she got on?

Then there was Larry, a young Irishman who got a radio telephone call the day before we arrived in Melbourne. The line was bad — he couldn’t be heard — and all he heard was that he wasn’t to write home until he read a letter that would be waiting for him at the G.P.O. in Melbourne. “It must be someone dead, Father” he said to me and he was very upset.

It must have been lonely reading that letter on his own in Melbourne.

Another Irishman with three kids had spent fifteen years as an odd job man around a hotel in his home town. He showed me his reference, and he was proud of his fidelity to duty at his job. I wonder how employers treated that reference letter and where Danny is working now. I hope Australians have treated him with the dignity that is his due and have helped him find a place where he can earn sufficient to keep his wife and children.

Another couple could find no trace of their baggage in the plan of the ship’s baggage room. Ship officials could not guarantee that it was even aboard. They radioed at their own expense to Southhampton but received no reply. Then migration officials told them that due to a mix up they would have to stay in Melbourne and not go by train to Adelaide, where they also had friends, as planned.

It wasn’t very hard to understand their troubles and worries. It was a little more difficult to brand them “whingers”.

Richard and Ann were a newly married couple without children. Ann left the ship crying into a borrowed handkerchief. She wasn’t the only one crying. It is a big moment, I found arriving in a new country.

They were taken to their hostel, shown their rooms and their shower and toilet blocks, which of course they had to share with other families, and given the knife, fork and spoon they had to take to the canteen for each meal. There was no light or power in their flat they discovered but Richard approached the authorities and soon got that right.

That afternoon they caught a train to the city, wandered around and got lost. They asked a man working at the station the way home. He offered to drive them home as the hostel was near his home. It turned out that this was the wrong hostel so the man took them to his own home, gave them some tea and made them welcome —• and later drove them to the right hostel.

‘I was lonely and you took me in”. Christ will tell this good Samaritan one day — and what a difference this act of charity made to Richard and Ann on their first day in Australia.

Jane is a young 19-year-old girl. Originally she was to go to a hostel. However since there was also a young Dutch girl homeless the migration authorities decided sensibly that Jane was more able to cope on her own. She spent her first three weeks in Australia sharing a flat with three men who were terrific to her. It is of course possible that things could have turned out otherwise.

Susan, Wanda and Ann were met at the boat by Ann’s boyfriend’s mother. They spent the first couple of nights at their place. Now Susan and Wanda share a flat with Jane mentioned above.

At a Christmas party Susan was talking to a girl she met there. In the gaiety of the party she must have mentioned life in a flat, for next day that girl she had only just met sent her brother to the flat with crockery and cutlery.

Another friend who called to take Wanda to her firm’s Christmas party must have noticed conditions in the bedroom for she sent a present of sheets and blankets that arrived Christmas morning. “People have been so kind”, Susan and Wanda told me.

“What’s it like living in a hostel?” I asked Rita and Dcs on Christmas night as I sat with them in their small hostel room. Their three children had the measles so they were unable to get out of the hostel that Christmas Day.

“Oh it’s not too bad at all”, they replied, “it’s the little things that are hard. Like only having half an hour for dinner. So you must be on time and if you’re in the city you have to leave early to get home on time or miss out”.

Or when Bob is at work and Rita has to take the kids on her own and leave them at the table while she queues up for plates of food for them, and then they overturn the sauce bottle or spill the salt or the sugar. Or when it rains and there’s nowhere for the kids to move in a hostel room. Or when it’s fine and the kids can go out and there’s no garden to keep them in and so they all move in packs. It’s not real easy bringing kids up that way.

The morning we arrived in Melbourne the ship rails were packed. The air was electric with suspense and excitement, fear, worry, and anticipation. The crowd aboard kept milling around silently. Nobody wanted to talk. The loudspeaker was continually calling for people to come to various points to meet migration officials.

The most colossal difference in attitude you could see was between those that had someone they knew or at least knew of waiting to meet them, and those who had only

officials and buses to meet them. I wished then that every migrant arriving could have someone with whom they had at least corresponded waiting to meet them at the port.

You know, I learnt a lot about migrants on that trip. I can understand their selfishness. They expect a lot of Australia and Australians — perhaps more than they should. Despite the wonderful attentiveness of migration officials, the migrants are treated pretty much in herds not as individuals.

They leave the ship in groups all branded with tags on their lapels. They are herded into buses and driven off like sheep to their hostels. Newly weds were separated aboard ship — the husband in a cabin full of men and the wife in a cabin full of women. It might all be necessary — but when men don’t treat you with the dignity that is your divine right, you can easily respond by failing to recognize that dignity in others.

A ship I found is a pretty confined area. A school for the children was arranged and run from England to Perth — but it was run and staffed voluntarily by the passengers — and there was nothing arranged for the last week from (Perth to Sydney. Parents with young children were consequently very tired and longing to arrive. Children were almost at screaming pitch.

I have painted the darker side. I haven’t spoken of the wonderful attentiveness of the crew especially towards little children. But I will view migrants with new eyes now. I can understand a little better why they speak and act sometimes in ways that seem to us selfish and tactless and whinging. We know as Australians all that they have meant to us, all that they have done for Australia.

We know as Christians that when we speak and emphasize differences between ourselves and any other man we are “straining at a gnat” but the greatest and most important facet of any man is the one we all have in common and all have from God. And if we have ever felt annoyed or picqued or resentful about anything that any migrant has ever said or done, we ought to ask ourselves seriously: what have I done as an Australian and a Christian for the migrant that lives in my street, my town, or my district?

We know as Australians all that migrants have done for Australia. The question is: what have I done as an Australian and a Christian for the migrant in my street, town or district?

(With thanks to Garry McDonald)