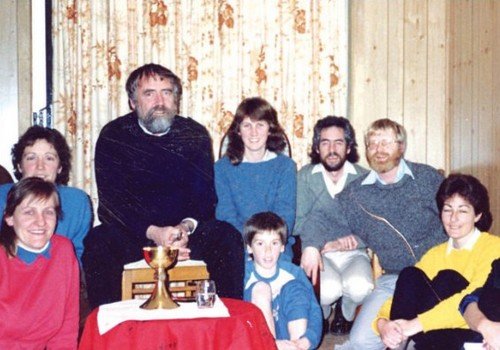 To mark the 25th anniversary of his death, a memorial Mass for Fr Hugh O’Sullivan was celebrated at The Monastery on May 29. FR DEAN MARIN reflects on Fr Hugh’s work with the YCW, and the importance of the movement and the ministry of its founder, Cardinal Joseph Cardijn.

Even before his ordination as a priest for the Archdiocese of Adelaide in 1964, Fr Hugh O’Sullivan, or Hughie as he was affectionately known to many throughout Adelaide and Australia, had come to know of Fr Joseph Cardijn the founder of the Young Christian Workers (YCW) movement.

In all his parishes – Hectorville, Brighton, Mount Gambier, Salisbury, Para Hills and finally Hallett Cove – Fr Hugh formed small groups of young workers in the YCW, steeped in the formation method of ‘See, Judge and Act’. He became Adelaide chaplain to the YCW, then national chaplain and eventually chaplain to the Asia-Pacific Region.

Fr Hugh was committed to the faith and the Church and with a passion for young workers and empowering them to be agents of change in the world. His down-to-earth acceptance of everyone he encountered will be remembered by so many in the Archdiocese.

Fr Hugh died on May 18 1997 and we are inspired by this great priest as we remember him.

It is also important to reflect upon the ministry of Fr Joseph Cardijn, who in 1967 was made a Cardinal by Pope Paul VI, and in particular his influence on the Second Vatican Council.

In an article by Stefan Gigacz, secretary of the Australian Cardijn Institute, on the occasion of the 50th anniversary of Cardijn’s death, he writes how Pope John XXIII’s 1961 encyclical, Mater et Magistra, recommended the use of the See, Judge and Act method that has since become a hallmark of Church documents on Catholic Social Teaching.

‘Cardijn drafted more than 25 formal detailed notes for the preparatory and conciliar commissions advocating his vision of the specifically lay apostolate of lay people, transforming their lives, their milieux and eventually the world,’ Gigacz wrote.

‘Much of his vision of lay apostolate was indeed finally incorporated both in the chapter on the laity in Vatican II doctrinal constitution: Lumen Gentium and in the Decree on the Lay Apostolate…Jocists bishops and periti played a particular prominent role in the drafting of Gaudium et Spes (Constitution of the Church in the Modern World).’

We start totally grounded in the reality and experiences of people’s lives in the here and now in society and in the world. Isn’t this equivalent to the ‘See’ section? Further on it says: ‘At all times the Church carries the responsibility of reading the signs of the times and of interpreting them in the light of the Gospel.’ Here’s the call again to appreciate the reality of the features of any given time, the ‘See’ section.

However, we don’t just stay there, we move on from here to interpreting them ‘in the light of the Gospel’. Isn’t this equivalent to the ‘Judge’ section? We consciously bring to bear the vision of the Gospel of Jesus, for us as Catholics coming from the Scriptures and our tradition, to discern the call of God and prepare us for action.

There’s another way at looking at Cardijn’s vision to learn so much for us as Church today. In his pamphlet ‘The Young Worker Faces Life’ he spoke of three truths as another way of understanding the See, Judge and Act method. The truth of experience, the truth of faith and the truth of method.

In the Archdiocese of Adelaide, we can’t overestimate the influence of Cardijn’s vision on our church life and the many lay leaders formed through it. Both Archbishop Gleeson and then Archbishop Faulkner promoted the Cardijn movements of the Young Christian Workers, Young Christian Students, and the Christian Life Movement. Back in the ‘80s the Diocesan Pastoral Renewal was underpinned by Cardijn’s vision. Later the vision of Basic Ecclesial Communities used the See, Judge and Act method in small neighbourhood groups, just naming it differently as ‘our story’, ‘God’s story’ and ‘the ongoing story’.

We need Cardijn’s vision and his See, Judge and Act method in the Church today. Firstly, it helps us to truly understand Vatican II and its pastoral and transformational focus for the world, as well as the role of each person in this mission.

Secondly, rightly understood and practised it will bring a unity of common purpose for all passionate about the faith and its place in the world.

There are tensions in our Church life today in Australia. The processes of consultation, listening, dialogue and discerning in preparation for the Plenary Council, our own Diocesan Assembly and now for the worldwide Synod in 2023 have highlighted differences amongst us in responses to the challenges facing the Church. How can we be united in facing these challenges? Use the See, Judge and Act process.

We need to begin with the real situations of people’s lives today. We need to listen, dialogue and grow in understanding of others. We accept and value human experience. We don’t start from what people should be doing or how they should be living. We can’t start from the way things were in the past and just turn the clock backwards. We value and accept the ‘see’ and ‘the truth of experience’.

But we don’t just stay there. This is where we start, not where we finish. And we don’t just automatically expect that the Church should change to mirror current ways of life.

Vatican II can be easily misinterpreted in this way. We need the ‘judge’ and ‘the truth of faith’, the Gospels, the whole of the Word of God and the living tradition of our Catholic faith with which to discern and judge the current realities. This tradition will always highlight the deep personal relationship with Jesus Christ and our unity as his Body on earth and our need for prayer and worship, the Eucharist and the Sacraments.

In our haste for solutions, in our need for immediate action, in our desire to be in touch with the times, we can downplay the ‘judge’ section and move on with our own ideas for action. We need to resist this temptation. And we all need formation and growth in understanding the Scriptures and our Catholic Teachings.

St Pope John XXIII’s opening remarks for the Second Vatican Council, taken from Vatican II in Plain English: The Council by Bill Huebsch, include: ‘The greatest concern of this council is this, that the sacred and central truths of our Christian faith should be guarded and taught more effectively…we will not depart from the truth as it is passed on to us by the early Fathers and Mothers of the Church. But we will also be attentive to these times, to the new conditions and new forms of life present in the modern world which have opened new arenas of work for Catholics.’

Then there’s ‘act’ which completes ‘the truth of method’. The Word of God affirms us of God’s acceptance, compassion and love, but also challenges us to change. We are challenged to act to bring about change within ourselves, family, community, society and world. Indeed, we act as part of God’s plan in Christ for the renewal of all creation. Cardijn always encouraged young workers not to act alone but with others, and so we act together united with the one common vision.

With the tensions in the Church today we have a recognised and acknowledged approach and pathway around which to be united and move forward together.

This pathway begins with and respects the real-life experiences of the people of our times; it relies upon and remains faithful to Scriptures and the teachings of our Catholic faith and moves forward with action, building God’s Kingdom on earth until it is fulfilled in heaven.

Used within movements and groups in the Church initially, it now needs to be used in all aspects of our Church life and my advice would be: come to know the Scriptures and the teachings of our faith and never overlook the judge section.

To mark the occasion and commemorate his life, the Australian YCW, Australian Cardijn Institute, Cardijn Community Australia and YCW Holdings are hosting a commemorative dinner on Saturday 28 May.

“As part of the AYCW’s National Action Conference being held in Adelaide, let’s come together to listen to stories from those who worked closely with Hugh, commemorate his life and action and celebrate his ongoing legacy,” writes Adelaide YCW worker, Ashish Chaulagain.

Cost: $55 per head (2 course meal)A bar will be available

Please RSVP as numbers are limited.To RSVP or for more details, please contact Ashish at 0449913292 or ashish.chaulagain@ycw.org.au

Making Monday the Best Day of the Week